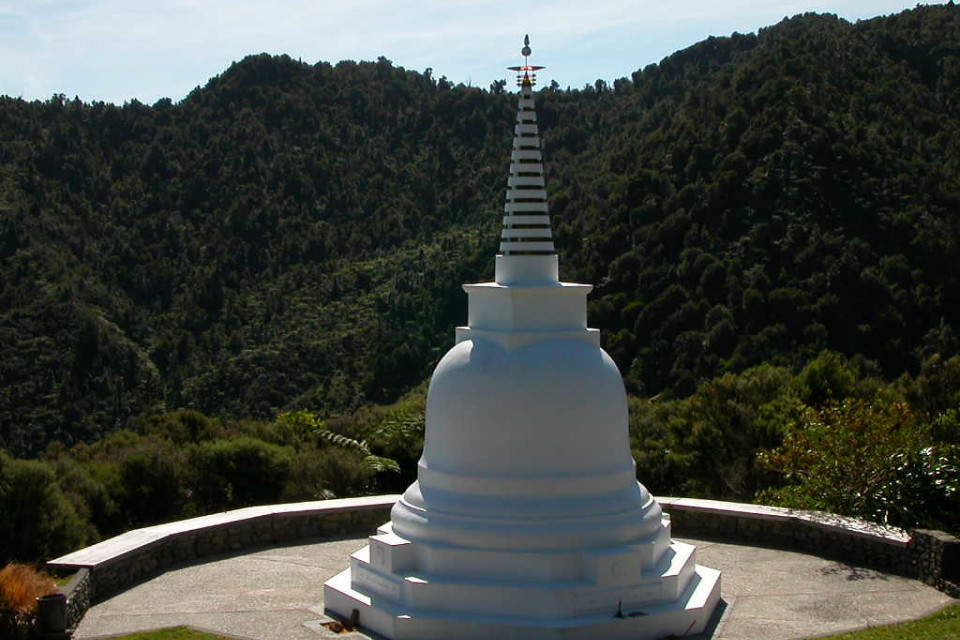 Early on in the Sudarshanaloka journey it became clear that grounding and embodying our vision in material form and creating an inspiring project to galvanise our energies was a necessary place to start. The idea of building a stupa was born.

Stupas in various shapes and styles are seen across the Buddhist world. They evolved from the practice in ancient times of building a mound over the burial place of royalty. As Buddhist monuments they usually hold the relics of important teachers, and in their very form symbolise the awakened mind and the path to that awakening.

The design of the Sudarshanaloka stupa was carefully considered. We wished for something that captured the archetypal essence and symbolism of the stupa through time and space, without specifically referencing any one traditional form. Award winning architect Hugh Tennant worked with us to create a design that met the suggestions of our teacher Sangharakshita while remaining as simple, elegant and universal in its form as possible.

Work proceeded through the summer of 1996/97, with a team of builders and supporters drawn from local and international Triratna sangha. The symbolic elements of the stupa's form were emphasised and celebrated at every stage of the construction through ritual and the incorporation of Buddha images and relics, until, in February 1997, we were ready for the final stage. The structure was complete, all that remained was its consecration, the final act of bringing the inert mater of concrete and steel 'alive' through the blessing of our teacher Sangharakshita and the installation of relics of Dhardo Rimpoche , one of Sangharakshita's own beloved teachers.

Parinirvana day, the annual marking of the Buddha's final passing, celebrated throughout the Buddhist world, was chosen as the most auspicious time to consecrate the Sudarshanaloka stupa. With due festivities and ceremony Urgyen Sangharakshita led the ritual to place ashes of Dhardo Rimpoche into the stupa, bringing it alive as a sacred monument. The essential message of Dhardo Rimpoche, that he created as a motto for his Tibetan refugee school in Kalimpong, Northern India, to Cherish the Doctrine, Live United and Radiate Love was later added to three faces of the stupa.

Each year, on Parinirvana day, (15th February or nearest weekend) we come together for Stupa Weekend, when we remember and celebrate the lives and influence of teachers past, reflect on death and impermanence, and rejoice in our precious opportunities for practise. The stupa symbolically represents both the fulfiment of that practise and the path, and we are indeed fortunate to have such a striking and beautiful reminder of the majesty and mystery of the awakening mind.

If you wish to visit the Sudarshanaloka stupa please feel free to do so, as long as the Retreat Centre is not closed for retreat. Check here or contact us before you come.

At the stupa the traditional protocol is to remove one's shoes at the entrance forecourt and circumambulate mindfully (perhaps chanting a mantra) in a clock-wise direction. This is a sacred site so please speak and behave respectfully and do not climb or sit on the stupa.