Posted by Akasamati on 10 September 2016 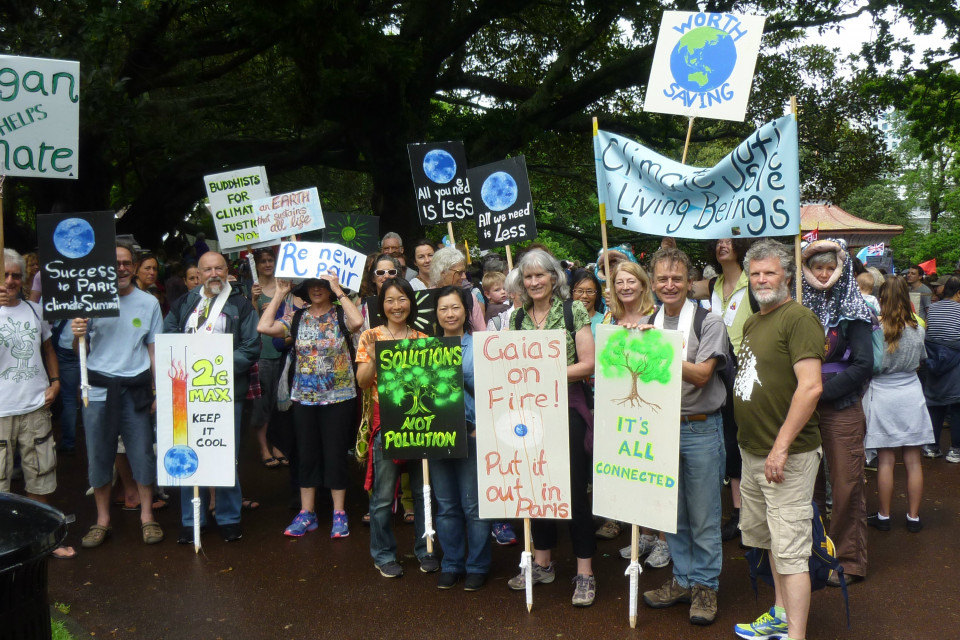 Many of us gathered for the 2016 climate march in Auckland (people from multiple Triratna centres ... including one from Sydney). It was a great day and a great cause. Here is a photo from the day.

Thought people like to see what other Triratna centres around the world are doing? Here is a recent statement made by the Dublin Buddhist Centre on global warming.

The science is now incontrovertible that our planet’s climate is changing due to human activities – activities such as the burning of fossil fuels, deforestation, fracking, industrial farming, and unsustainable land use. This change has already caused suffering for those least in a position to do anything about it, and who have done the least to cause the change: such as people in the Global South as well as animals, wildlife, and ocean life – with some species now at the risk of extinction.

It is essential, in order to prevent wide-scale, devastating destruction to our planet, to keep the rise in the average global temperature to under 2 degrees Celsius. Recently it was discovered that we are already halfway to that 2 degree limit which highlights the need for decisive action.

At the moment leaders from 195 countries from across the world are gathered in Paris at the UN Climate Conference (COP21) to negotiate a deal to limit their countries’ carbon emissions. At present their pledges have us on track for 3 degree warming – which, if unchecked, will most likely lead us on a path to runaway climate change and will unleash unimaginable suffering, with severe weather events, droughts, famine and, inevitably, wars over limited resources.

One of the central tenets of Buddhism is the alleviation of suffering and the cultivation of empathy and solidarity with all living beings. Buddhism teaches the principle of non-harm, as well as the practice of contentment, which means living happily on less, as well as sharing what you have with others. These principles are at the heart of Buddhist ethics, and they can be practiced both individually but also collectively in the context of the Sangha (the spiritual community).

The Dublin Buddhist Centre is part of a world-wide movement of Buddhist centres, forming part of the Triratna Buddhist Community. The Dublin Buddhist Centre expounds the principles of Buddhism and seeks to embody these principles in the context of our modern, consumerist society. Environmental concern naturally flows from the practice of non-harm, the cultivation of Metta, loving-kindness, for all beings, and accordingly vegetarianism and a move towards veganism is promoted as part of Buddhist teaching. Living much more simply and living communally are other practices that are encouraged as a means of consuming fewer resources.

In light of the above, the Dublin Buddhist Centre has a ‘Sustainability group’ which is currently working towards identifying and implementing ways to make the Centre more environmentally sustainable, for example, in ventures like Buddhist Action Month each year.

We now urge all people to reflect deeply on the fact that their actions (and inactions) have consequences, for themselves, for others and for future generations. While the gravity of the climate crisis cannot be overemphasised, it also presents an opportunity to re-imagine and create a better future for all, informed by the values of loving-kindness, contentment, and recognition of our solidarity with all living beings. We can use this opportunity to work towards that vision, both individually and collectively, as well as taking immediate action to prevent further global warming.